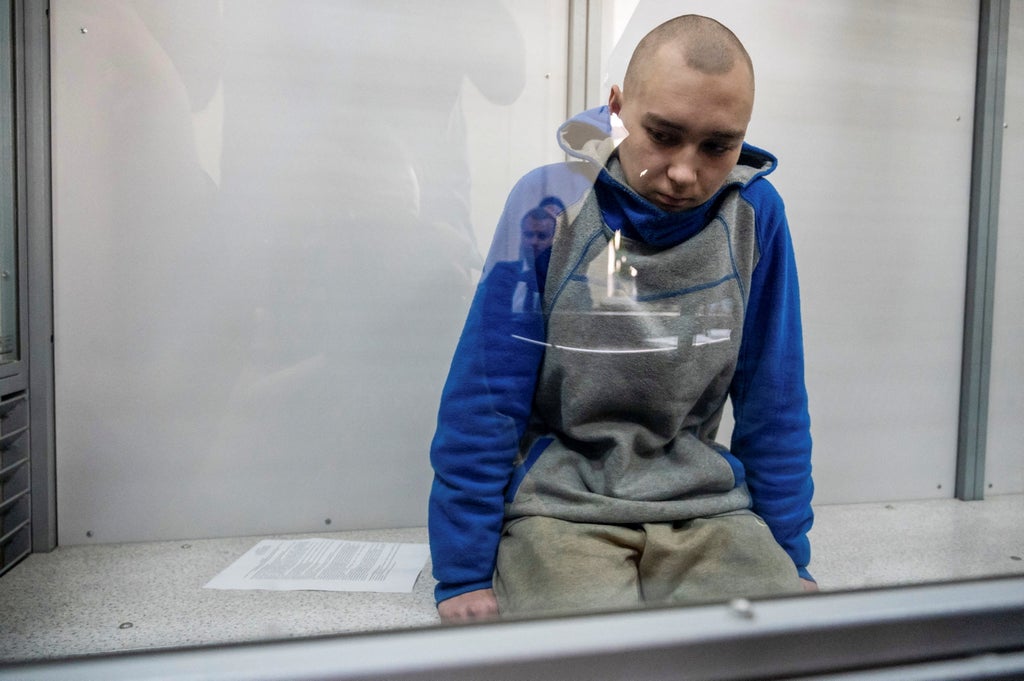 A Russian soldier charged with killing an elderly civilian in Ukraine is set to face a Kyiv court on Friday in the first war crimes trial since Moscow launched its brutal invasion in February.

Sergeant Vadim Shyshimarin, 21, is accused of shooting the unarmed 62-year-old Ukrainian man in the northeastern village of Chupakhivka in the Sumy Oblast. According to Ukrainian law, he could face up to life in prison.

Victor Ovsyanikov, defending, has acknowledged that the case against the alleged killer is strong, but said the final decision over what evidence to allow is yet to be made by the court.

Ovsyanikov said that he and the defendant had not yet decided how he will plead.

The trial of Shyshimarin, a captured member of a tank unit, comes as Ukraine’s prosecutor general Iryna Venediktova conducts an ever-growing number of investigations into claims that president Vladimir Putin’s troops killed, tortured and abused civilians.

Ms Venediktova’s office has said it is looking into more than 10,700 potential war crimes involving more than 600 suspects, including Russian soldiers and government officials.

Revelations of alleged civilian massacres began to circulate after Russia withdrew its troops from the northeast of Ukraine following its unsuccessful bid to capture the capital.

Bucha, a town located some 25km (15.5 miles) west of Kyiv, was among the first areas to drum up international condemnation and disgrace after images emerged of mass graves and streets strewn with bodies.

As the inaugural war crimes case in Ukraine, all eyes are on Shyshimarin’s prosecution.

One of Ukraine’s largest human rights groups has said activists will monitor the Russian soldier’s trial to ensure that his legal rights are protected. It can be difficult, he said, to maintain the neutrality of court proceedings during wartime.

The observance of the trial’s rules and norms “will determine how similar cases will be handled in the future”, Volodymyr Yavorskyy, coordinator at the Centre for Civil Liberties in Kyiv, said.

Vadim Karasev, an independent Kyiv-based political analyst, said it’s important for Ukrainian authorities “to demonstrate that the war crimes will be solved and those responsible will be brought to justice in line with international standards”.

Over the past week, Venediktova, her office and the Security Service of Ukraine, the country’s law enforcement agency, have posted a few details from the investigation into Shyshimarin’s actions on their social media accounts.

On 28 February, four days after Russia invaded Ukraine, Shyshimarin was among a group of Russian troops that had been defeated by Ukrainian forces, according to Venediktova’s account.

As the Russians fled, they allegedly fired at a private car and seized the vehicle. They then drove to Chupahivka, a village in the Sumy region about 200 miles east of Kyiv.

On the way, Venediktova said, the Russian soldiers saw a man walking on the sidewalk and talking on his phone. Shyshimarin was ordered to kill the man so he wouldn’t be able to report them to Ukrainian military authorities. She does not identify who gave the order.

Shyshimarin fired his Kalashnikov rifle through the open window and hit the victim in the head.

“The man died on the spot just a few dozen meters from his house,” Venediktova wrote.

The Security Service of Ukraine, known as the SBU, posted a short video on 4 May of Shyshimarin speaking in front of camera and briefly describing how he shot the man.

The SBU described the video as “one of the first confessions of the enemy invaders”.

“I was ordered to shoot,” said Shyshimarin, wearing a blue and gray hooded sweatshirt. “I shot one [round] at him. He falls. And we kept on going.”

With additional reporting from AP