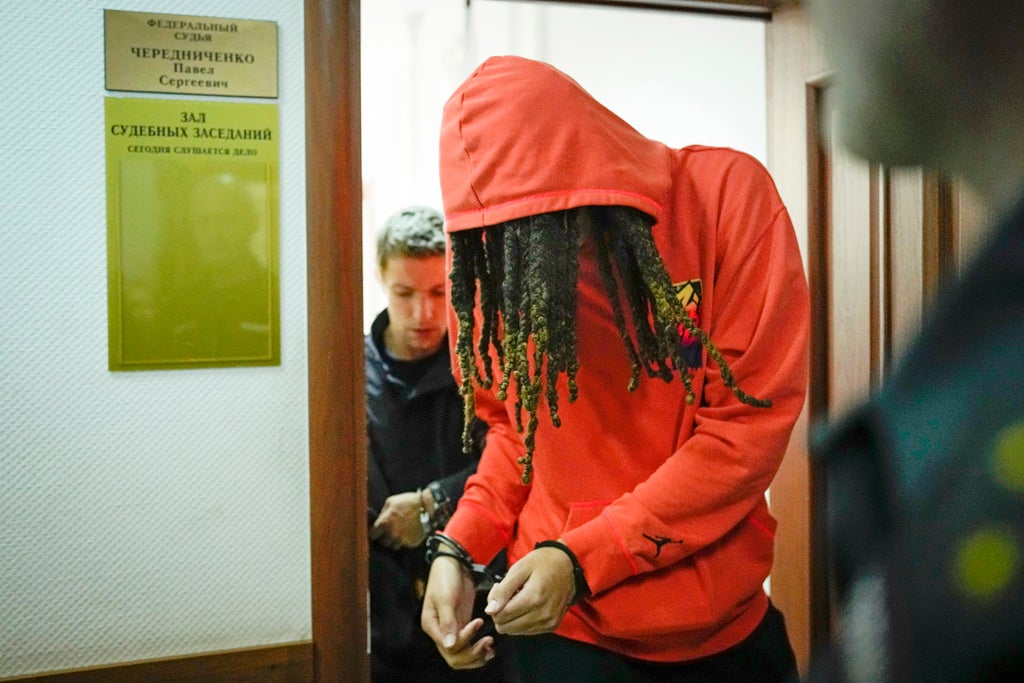 HOSTAGES-BEHEADINGS-QATAR LAWSUIT — Qatar, a key Persian Gulf ally of the Biden administration, is facing renewed scrutiny for its alleged financial ties to terrorist groups after a new lawsuit from the family of an American journalist beheaded by the Islamic State and a separate federal investigation into a member of the country’s royalty. By Alan Suderman. SENT: 1,150 words, photos.

RUSSIA-UKRAINE-WAR — Journalists packed a small courtroom in Kyiv for the trial of a captured Russian soldier accused of killing a Ukrainian civilian in the early days of the war — the first of dozens of war crimes cases that Ukraine’s top prosecutor says her office is pursuing. By Oleksandr Stashevskyi and David Keyton. SENT: 1,000 words, photos, videos. With RUSSIA-UKRAINE-WAR-THE LATEST.

SUPREME COURT-ABORTION-PROTESTS — Demonstrators are rallying from coast to coast in the face of an anticipated Supreme Court decision that could overturn women’s right to an abortion. More than 380 events were planned Saturday, with the largest gatherings in big cities like Los Angeles, Chicago and New York City. SENT: 280 words, photos. UPCOMING: Updates throughout the day; Washington rally begins at noon.

BABY FORMULA SHORTAGE-POLITICS — The nationwide shortage of baby formula is quickly becoming the GOP’s latest election-year attack on President Joe Biden. He says there’s “nothing more urgent we’re working on” and has pushed back on criticism that his administration’s response has been lacking. By Paul J. Weber. SENT: 890 words, photos.

VIRUS-OUTBREAK-NORTH-KOREA — North Korea has reported 21 new deaths and 174,440 more people with fever symptoms as the country scrambles to slow the spread of COVID-19 across its unvaccinated population. By Kim Tong-Hyung. SENT: 1,040 words, photos.

RUSSIA-UKRAINE WAR-FINANCE LOOPHOLES — The Treasury Department cites the conduct of Russian in laying out recommendations for guarding against money laundering and other threats to the U.S. financial system. SENT: 330 words, photos.

VIRUS OUTBREAK-MILITARY ACADEMIES — Four cadets at the Air Force Academy may not graduate or be commissioned as military officers later this month because they have refused the COVID-19 vaccine, and they may be required to pay back thousands of dollars in tuition costs. By Lolita C. Baldor. SENT: 760 words, photo.

VIRUS-OUTBREAK-PASTOR-CHARGED — The Louisiana Supreme Court threw out charges against a pastor who flouted restrictions on gatherings early in the coronavirus pandemic, ruling 5-2 that the governor’s executive orders violated freedom of religion. SENT: 530 words, photo.

NEW-ZEALAND-PM-COVID — New Zealand Prime Minister Jacinda Ardern has tested positive for COVID-19 but said she still plans to travel to the U.S. later this month for a trade trip and to give the commencement speech at Harvard University. SENT: 350 words, photos.

TRANSGENDER-LAW — A federal judge as blocked part of an Alabama law that made it a felony to prescribe gender-affirming puberty blockers and hormones to transgender minors. SENT: 570 words, photo.

RAPPER YOUNG THUG ARREST — Attorneys for Young Thug, who was arrested this week under an indictment accusing him of co-founding a violent street gang, filed an emergency motion seeking bond for the Atlanta rapper, calling his confinement “inhumane.” SENT: 440 words, photos.

MEDIA-ELECTION-LAWSUIT — A Colorado judge has denied motions to dismiss a defamation lawsuit filed by an election systems worker against former President Donald Trump’s campaign, two of its lawyers and a handful of conservative media figures and outlets. SENT: 200 words.

SPACEX-STARLINK-LAUNCH — A SpaceX rocket carried 53 satellites for the Starlink internet constellation into orbit after blasting off from California. SENT: 100 words, photos.

ELECTION 2022-SENATE-IOWA — Abby Finkenauer’s bid to clinch the Democratic nomination for Senate in Iowa wasn’t supposed to be so fraught. But after she was nearly blocked from appearing on the ballot in the June 7 primary, some prominent Democrats are giving another look at her main rival, Mike Franken, a retired Navy admiral. By Thomas Beaumont. SENT: 1,020 words, photos.

CAPITOL RIOT-INVESTIGATION — The Jan. 6 committee’s decision to subpoena House Minority Leader Kevin McCarthy and other congressional Republicans over the insurrection at the Capitol is as rare as the deadly riot itself, deepening the acrimony and distrust among lawmakers. By Congressional Correspondent Lisa Mascaro. SENT: 1,070 words, photos.

CONGRESSIONAL REDISTRICTING-FLORIDA — A judge’s ruling that a new congressional map drawn by Republican Florida Gov. Ron DeSantis’ staff is unconstitutional has been appealed by the state. SENT: 430 words, photos.

OBIT-MCFARLANE — Former White House national security adviser Robert C. McFarlane, a top aide to President Ronald Reagan who pleaded guilty to charges for his role in an illegal arms-for-hostages deal known as the Iran-Contra affair, has died. He was 84. McFarlane, who lived in Washington, died from complications of a previous lung condition at a hospital in Michigan, where he was visiting family, according to The Washington Post and The New York Times. SENT: 500 words, photos.

SPRING-WILDFIRES-NUCLEAR-LAB — Public schools were closed and evacuation bags packed this week as a stubborn wildfire crept within a few miles of the city of Los Alamos and its companion U.S. national security lab — where assessing apocalyptic threats is a specialty and wildland fire is a beguiling equation. SENT: 1,110 words, photos.

EXECUTION-TENNESSEE — At least two people connected to a Tennessee execution that was abruptly put on hold last month knew the night before that the lethal injection drugs the state planned to use hadn’t undergone some required testing, newly released records show. SENT: 830 words, photos.

INFANT-DEATHS-PLEA — A woman accused in the case of two dead infants found decades ago in South Carolina, including a baby girl who later became known as “Julie Valentine,” has entered an Alford plea to three charges. SENT: 670 words, photo.

BEACH-HUMAN-REMAINS — A woman who disappeared in a beach community on New York’s Long Island more than a decade ago, sparking an investigation into a possible serial killer, said “there’s somebody after me” in a newly released 911 tape. SENT: 560 words, photos.

JAPAN-OKINAWA-EXPLAINER — Okinawa on Sunday marks the 50th anniversary of its return to Japan on May 15, 1972, which ended 27 years of U.S. rule after one of the bloodiest battles of World War II was fought on the southern Japanese island. SENT: 970 words, photos.

FRANCE-ELECTION-NASTY CAMPAIGN — The stakes are high, the fight nasty and the party of centrist President Emmanuel Macron is the one to beat. But to a visitor from outer space, June’s parliamentary election in France could look like a contest between the far right and the hard-left. SENT: 640 words, photos.

HUNGARY-BOMB SQUAD DOG — Hungary’s military has found a new mission in life for a talented dog who was rescued from abusive owners, recruiting 2-year-old Logan to serve in counterterrorism operations for an elite bomb squad. SENT: 550 words, photos.

BRAZIL-ELECTIONS-HACKERS — More than 20 would-be hackers gathered in the Brazilian electoral authority’s headquarters in the capital this week. Their mission: infiltrate the nation’s voting system ahead of a hotly anticipated race in October. SENT: 850 words, photos.

INDIA-FIRE — Police arrested two owners of a company that manufactures and sells security cameras after a massive fire reportedly started in their office in a four-story commercial building in the Indian capital, killing 27 people and injuring 12 others, police and fire officials say. SENT: 410 words, photos.

SCI-LUNAR-ECLIPSE — A total lunar eclipse will grace the night skies this weekend, providing longer than usual thrills for stargazers across North and South America. The celestial action unfolds Sunday night into early Monday morning, with the moon bathed in the reflected red and orange hues of Earth’s sunsets and sunrises for about 1 1/2 hours, the longest totality of the decade. It will be the first so-called blood moon in a year. By Marcia Dunn. SENT: 360 words, photos.

ENDANGERED-WOLVES — U.S. wildlife managers want to see at least 320 Mexican gray wolves roaming the Southwest within the next several years as they try to recover an endangered species that for decades has been the focus of political strife and litigation. SENT: 560 words.

INDIA-WHEAT — India has banned exports of wheat effective immediately, citing a risk to its food security, partly due to the war in Ukraine. SENT: 270 words, photos.

CRYPTO-WILD-WEEK — It’s been a wild week in crypto, even by crypto standards. Bitcoin tumbled, stablecoins were anything but stable and one of the crypto industry’s highest-profile companies lost a third of its market value. SENT: 780 words, photos.

OBIT-FRED WARD — Fred Ward, a veteran actor who brought a gruff tenderness to tough-guy roles in “The Right Stuff,” “The Player” and “Tremors,” has died. He was 79. SENT: 500 words, photos.

BKN—WARRIORS ADVANCE — Stephen Curry, Klay Thompson and Draymond Green are cherishing this playoff run a little more given they spent the past two years watching the postseason instead of their familiar position chasing championships.Now, with those experienced faces and a cast of new stars, the Warriors are headed to another Western Conference Finals and need just four more wins to give themselves a title chance again. They will lean on the experience of Curry, Green, Thompson and Kevon Looney having been here so many times already. By Janie McCauley. UPCOMING: 850 words, photos by 4 a.m.

BKN–CELTICS-BUCKS — Jayson Tatum scored 46 points, outdueling Giannis Antetokounmpo and making sure there wouldn’t be another Milwaukee Bucks fourth-quarter comeback, and the Boston Celtics beat the defending champions 108-95 to force a seventh game in their Eastern Conference semifinal. The third straight victory for a road team in this series forced a Game 7 on Sunday in Boston. The winner heads to Miami to begin an East finals matchup with the top-seeded Heat on Tuesday. Antetokounmpo had 44 points, 20 rebounds and six assists. By Steve Megargee. SENT: 960 words, photos.

HOW TO REACH US

70 facts about the Queen to mark her Platinum Jubilee