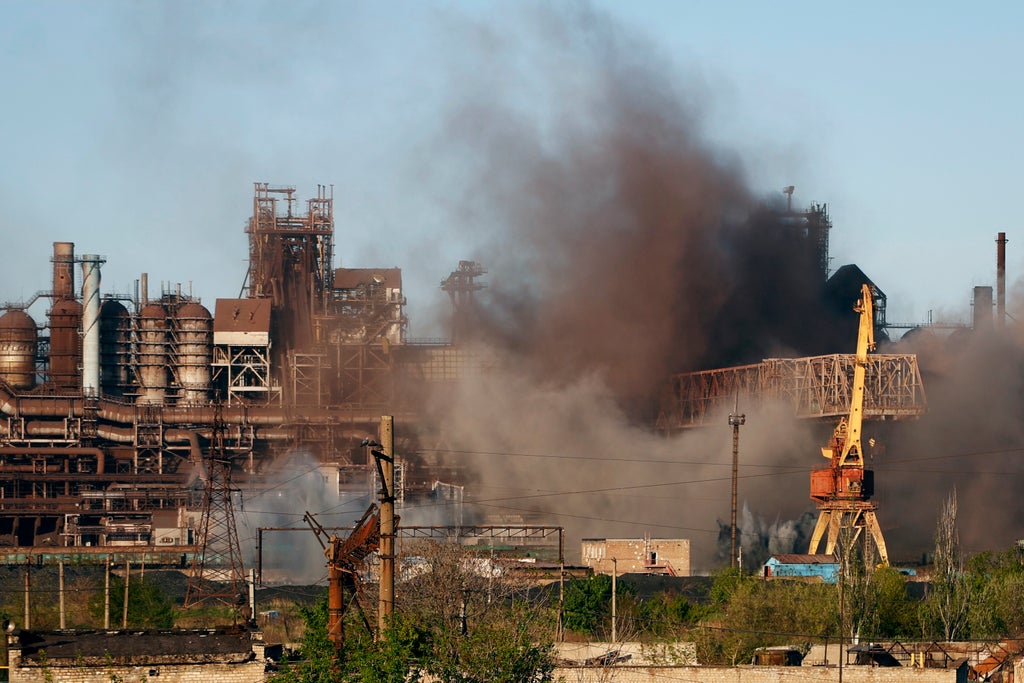 The staunch defence of Mariupol has “completely changed the course” of Russia’s war on Ukraine, an aide to president Volodymyr Zelensky has said.

After weeks holed up in bunkers underneath the Avozstal steelworks, hundreds of Ukrainian fighters were reported to have been transported from this last Ukrainian bastion in the devastated city to Russian-held territory nearby.

The fighters – including some from the Azov Battalion, whose far-right links are symbolically useful to Vladimir Putin’s disputed claims of “denazification” – now face an uncertain fate, as Russian politicians talked down Ukrainian hopes of prisoner exchanges and Moscow investigators unveiled plans to interrogate the captives over what they claimed were potential “crimes committed against the civilian population”.

Meanwhile, Moscow appeared to relax its threats over Finland and Sweden joining Nato, with foreign minister Sergei Lavrov saying their bids would make “not much difference” as they have been participating in Nato military drills for years.

The Nordic countries expressed “optimism” that Turkey would not block their bids, after Ankara surprised its Nato allies by vowing to do so.

Officials discussing Ukraine’s exchange of Azov regiment fighters from the steel mill against the release of Russia’s prisoners of war have said negotiations are underway.

The Russian parliament is set to take up a resolution to halt the exchange, Russian news agencies have reported.

However, Ukraine’s deputy defence minister Hanna Maliar said that the negotiations were ongoing along with plans to rescue Ukrainian fighters still trapped inside the steel mill.

Volodymyr Zelensky said the “most influential international mediators are involved” in the exchange — first such in the course of invasion.

The true horror of Russia’s war in Ukraine

In the 84 days of continuous attacks since the invasion began, Ukrainian forces have managed to combat the Russian forces in regions across the former Soviet territory.

And now, as soldiers retreat, Ukrainians are returning to find areas bombed and shelled to rubble. Signs of possible war crimes are visible in sight as many residents in the besieged country are recounting scenes of torture, execution and sexual violence.

The Independent’s Bel Trew has travelled across Ukraine, finding a trail of destruction and Ukrainians trying to find out about the fate of loved ones, documenting what’s happened and trying to put their lives back together.

Documentary: The true horror of Russia’s war in Ukraine | On The Ground

Ukraine’s defences have managed to repel Russian forces from several parts of the country, liberating towns and cities from Russian control. But as the soldiers have retreated, Ukrainians have returned to find areas destroyed by shelling and signs of possible war crimes, with many residents recounting scenes of torture, execution and sexual violence. Bel Trew has travelled across Ukraine, finding a trail of destruction and Ukrainians trying to find out about the fate of loved ones, documenting what’s happened and trying to put their lives back together.

A high-ranking Russian military officials have been killed by guerrilla fighters in Melitopol, Ukrainian military said on Tuesday, reported The Kyiv Independent.

The Russian troops, occupying the region, are “trying to hide the situation”, said Zaporizhzhia regional military administration on its Telegram channel.

Officials added that Russian forces have stepped up with the inspection of private vehicles in Melitopol “probably in search of guerrillas”.

Britain’s fresh round of sanctions will back green trade to reduce the global dependency on Vladimir Putin’s oil and gas, top officias are set to announce.

International Trade Secretary Anne-Marie Trevelyan will use a major speech to set out the need to “decisively turn our backs on the era of dependence on polluting fuels”, supporting British firms exporting technology to help with the shift to cleaner forms of energy.

The combination of sanctions on Russia and reduced reliance on fossil fuels will “de-Putinise the world’s economy”, she will say in a speech in the City of London.

Volodymyr Zelensky said missile shelling by Russia in a number of regions in Ukraine and subversive activity at the border are merely an attempt of the Moscow troops to “compensate for a series of failures in the east and south” of the country.

Talking about intensified counterattack in Lviv, Sumy, Chernihiv and air strikes in the Luhansk and other border areas, Mr Zelensky said: “All this is not just creating tension for our state, not just testing our strength. This is a kind of attempt of the Russian army to compensate for a series of failures in the east and south of our country.”

Mr Zelensky said that these strikes, “like many previous ones, do not change anything radically.”

Especially since our air defence and anti-sabotage measures are becoming stronger, he added.

Russia’s invasion and nearly month-long war on Ukraine is taking a toll on people’s mental health not just within the frontiers but also “far beyond the borders”, a new study shows.

Many are experiencing worsening of symptoms “appear to be related to the war” started by the Kremlin on its neighbour on 24 February, a new study of Danish patients with mental health conditions has found.

According to the researchers from Aarhus University, any overall negative impact elsewhere “will be nothing compated to what the Ukrainian population is experiencing”.

Thousands have lost their lives and nearly 13 million people have been rendered refugees in Ukraine after fleeing their homes.

In his first such address, Volodymy Zelensky addressed the filmmakers and actors at the opening of the 75th Cannes international film festival where in he told the story of Ukraine’s invasion in the form of a movie.

“On February 24, 2022, Russia launched a full-scale war against Ukraine. Planning to go further to Europe. And what kind of war is this? I want to answer this question as clearly as possible. Armed with the words that were said by cinematography in the years after the previous continental war,” Mr Zelensky said, adding that people have already heard most of these “eerie” words.

“But, unfortunately, this has become a reality. Remember that? Remember how it sounded in the movies?” the actor-turned-president said in his virtual address.

He added: “You smell that? Napalm, son. Nothing else in the world smells like that. I love the smell of napalm in the morning…”

“Yes, it started in Ukraine in the morning. At four o’clock, when we heard the first missile explosions. When the air strikes began. And when death, going to Ukraine across the border, marked its equipment with the swastika analogue – the “Z” symbol,” the president said.

“They all want to be better Nazis than Hitler…,” he added.

“Now, there is not a single week passing without mass graves of killed and tortured people found in the territory where Russian troops were or still are. 229 children were killed as a result of the Russian invasion. They can’t get anywhere but kill, kill, kill! They have sown Europe with corpses,” the wartime president said.

“War isn’t hell. War is war, and hell is hell. And of the two, war is a lot worse,” Mr Zelensky said.

Russian forces fired missiles at the western Lviv region and the Sumy and Chernihiv regions in the northeast on Tuesday, and were and carrying out airstrikes in the eastern Luhansk region, Volodymyr Zelensky has said.

“All of this is not just creating tension for our state, is not just a test of our strength,” Mr Zelensky said. “This is kind of an attempt to compensate the Russian army for a series of failures in the east and south of our country.””

But according to Mr Zelensky, the Russians are unable to demonstrate any success in the areas where they are trying to attack.

So “they are trying to show success through their missiles and other activities, but also to no effect”, Mr Zelensky said, adding: “These strikes, like the many previous ones, do not fundamentally change anything. Moreover, our air defense and anti-sabotage measures are getting stronger.”

The hundreds of fighters reportedly released from underneath Mariupol’s Azovstal steelworks now face an uncertain fate, with some in Moscow keen to pour cold water on Ukrainian hopes of a potential prisoner swap.

The final defence of Mariupol was led by the Azov Regiment, whose far-right links are symbolically useful to Vladimir Putin’s disputed claims of “denazification”. Ukraine claims the militia has been folded into Ukraine’s National Guard – a military wing of the interior ministry – and that it has been reformed away from its radical nationalist origins, with many new members joining because of its military professionalism.

In an agreement with Moscow, many of the soldiers have reportedly been transported from Azovstal to Russian-held territory nearby in the past 24 hours, after weeks held out in bunkers under the steelworks.

Calling their departure from the plant “the only option”, Ukraine’s deputy defence minister Hanna Maliar suggested they would be swapped in a prisoner exchange.

But some high-profile Russian politicians spoke out against any prisoner swap.

Vyacheslav Volodin, speaker of the State Duma, Russia’s lower house, said: “Nazi criminals should not be exchanged”, while Leonid Slutsky, one of Russia’s negotiators in talks with Ukraine, called the evacuated combatants “animals in human form” and said they should be executed.

Russia’s main federal investigative body said it intends to interrogate the troops to “identify the nationalists” and determine whether they were involved in crimes against civilians.

In his nightly video address to the nation, Volodymyr Zelensky said Ukraine is working to get its remaining troops safely out of the Azovstal steel plant, and that the mission was being supervised by Kyiv’s military and intelligence officers, while “the most influential international mediators are involved”.

More than 260 Ukrainian fighters — some of them seriously wounded and taken out on stretchers — left the ruins of the Azovstal plant on Monday and turned themselves over to the Russian side in a deal negotiated by the warring parties.

Ukrainian authorities would not say how many were still there, but seven buses carrying an unknown number of Ukrainian soldiers from the plant were reportedly seen arriving at a former penal colony on Tuesday in the town of Olenivka, approximately 55 miles north of Mariupol.