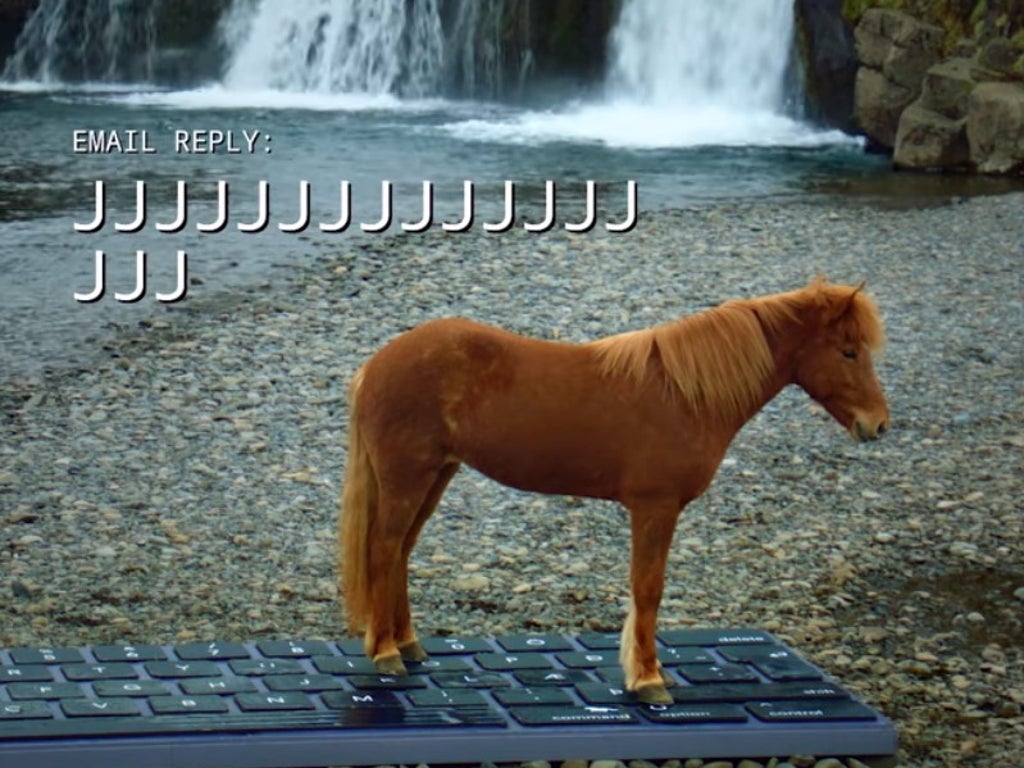 A new campaign from Iceland is replacing traditional out of office emails with a response written by a horse.

The bizarre initiative, from tourism agency Inspired by Iceland and Horses of Iceland, allows people to request a special message composed by Icelandic horses whenever they take a holiday from work.

The service, named OutHorse, delegates email responsibilities to one of three horses. Litla Stjarna frá Hvítarholti is described as a “fast typer but might take a nap”.

Hekla frá Þorkellshóli is a good choice for those who work in a corporate environment, as the horse is friendly and “trained in corporate buzzwords”.

To teach the horses how to type, Inspired by Iceland built a giant replica keyboard with specially crafted tiles that would feel comfortable for the animals to walk on.

“The Icelandic horse is a really special breed. It’s one of the most pure bred breeds in the world,” Jelena Ohm from Icelandic Horses said.

“For this training we received a very large replica of the keyboard, so they got used to how to walk over it.”

The campaign comes after a survey by Inspired by Iceland found that at least 55 per cent of workers check their emails while on holiday. The agency said it aims to highlight the importance of truly disconnecting from work while on holiday.

OutHorse has been hailed as “genius” on social media, with one Twitter user asking whether the campaign would consider “Slack integration”.

Another said it was a reminder that “Icelandic horses are truly marvelous”.

“Is there also an OutHorseYourAcademicPaper service? Please,” one person joked.

“Now that’s an interesting idea! They have become quite skilled in their typing so we’ll take this into consideration!” Inspired by Iceland said in response.

“I will be OutHorsing all emails to the Icelandic horse called Hekla frá Þorkellshóli, who is trained in corporate communications and knows all the buzz words!” another person wrote.

In the UK, trade union Prospect is calling on the government to introduce a “right to disconnect” for employees outside of office hours.

A survey commissioned by Prospect in April 2021 found that 66 per cent of people would support a “right to disconnect” being added to the UK Employment Bill.

The campaign comes after the Republic of Ireland introduced new measures last year which gives employees the right to not respond to messages, calls or emails outside of work hours.