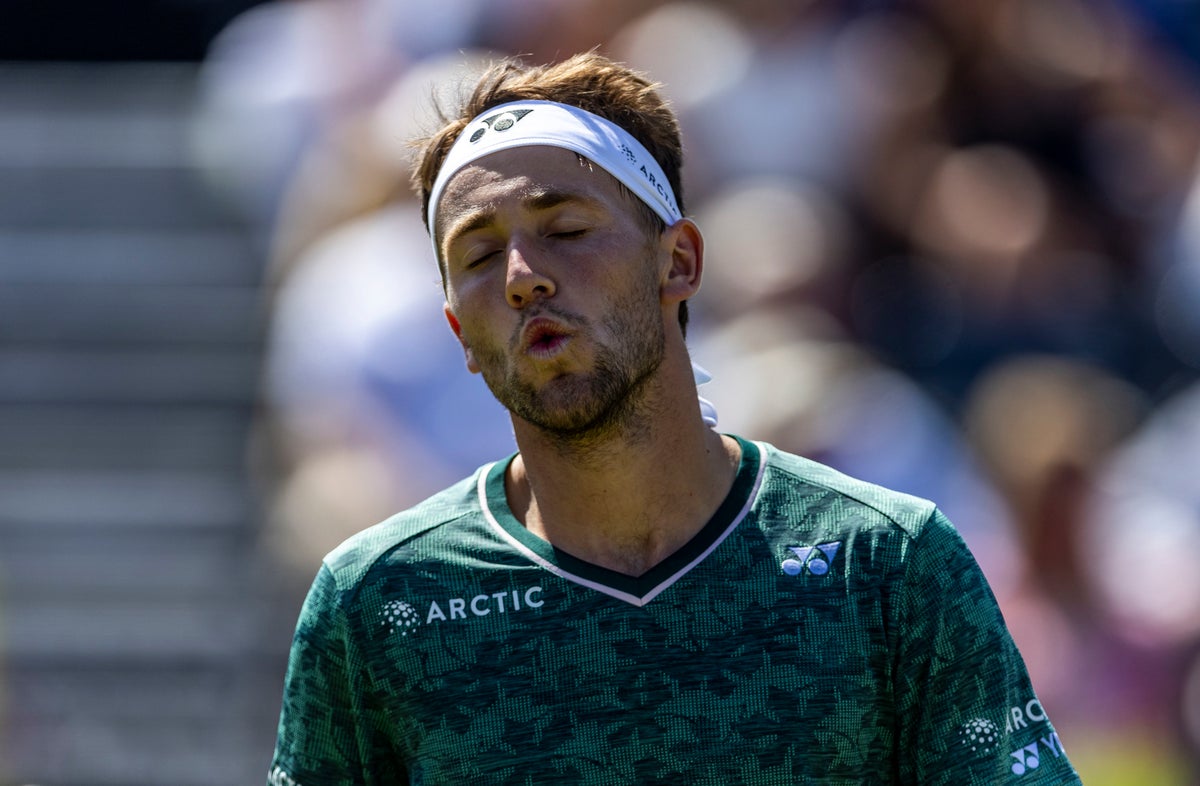 Preparation for Wimbledon continues at the Hurlingham Club this afternoon as French Open finalist Casper Ruud and the World no. 7 Carlos Alcaraz are in exhibition action at the Giorgio Armani Tennis Classic.

23-year-old Ruud was beaten by Rafael Nadal in straight sets in the French Open becoming the first man from Norway to reach a grand slam final and he will be hoping to go one better on the grass courts of Wimbledon in July. He’ll be facing Belgium’s Zizou Bergs.

Alcaraz will follow Ruud and Berg’s match wit one of his own against Frances Tiafoe before facing Ruud himself in a second exhibition on Saturday. The Spaniard lost in the second round on his Wimbledon debut last year, but has subsequently reached the quarter-finals at US Open and French Open giving the teenager belief that he has the skill to go further in grand slams.

Follow all the action from today’s Hurlingham Club schedule below:

Alcaraz meets Tiafoe’s first serve with a simple shot back into the middle of court and the American forces him to the opposite side of the baseline before guiding a volley return into the open space on court.

He follows it up with an ace and takes a 30-0 lead in his first service game.

Alcaraz takes the first game with two more accurate serves. What can Tiafoe respond with?

Two well directed serves straight up from Carlos Alcaraz give France Tiafoe no chance to even return the ball. the third serve is closer to the American who belts it back and collects his first point in the game.

Carlos Alcaraz will serve first as Frances Tiafoe electing to receive the ball after winning the toss. Both men go through a few warm up serves as their profiles are read out by an announcer on court.

For the longest time Carlos Alcaraz was named in the schedule without an opponent but he’s stepped onto court alongside Frances Tiafoe in what should be another decent match.

Alcaraz should be the favourite to win but Zizou Bergs just shocked Casper Ruud. Can American Frances Tiafoe do the same?

What a game match from Zizou Bergs!

He must have been a late addition to the schedule as Casper Ruud was down to face David Goffin this afternoon but the 23-year-old turned up and earned a straight sets victory over the French Open finalist!

Ruud didn’t seem too disheartend after the match telling the crowd: “It was fun to be out there and it was a new experience for me. It was good practice as I typically don’t get to play on grass courts that often.”

A drop shot winner from Ruud earns him a rare break point but the response is great from Bergs. A powerful serve and an even heavier return sees Ruud softly knock the ball into the net to bring the game back to deuce.

Bergs then wins the next point with a smash! Can he win the game now…?

Another ace from Bergs sets him up with another match point but his eagerness in the next rally gets the better of him and he hooks a wild forehand out of play.

Zizou Bergs may just be feeling a bit nervous. He’s starting to miss his first serve and has made some simple errors in this game to give Casper Ruud a 15-30 lead.

Ruud does the sensible thing and tries to keep the ball in play but Bergs returns come with more force each time. Ruud attempts to take the pace off the ball with a slice but hits it into the net.