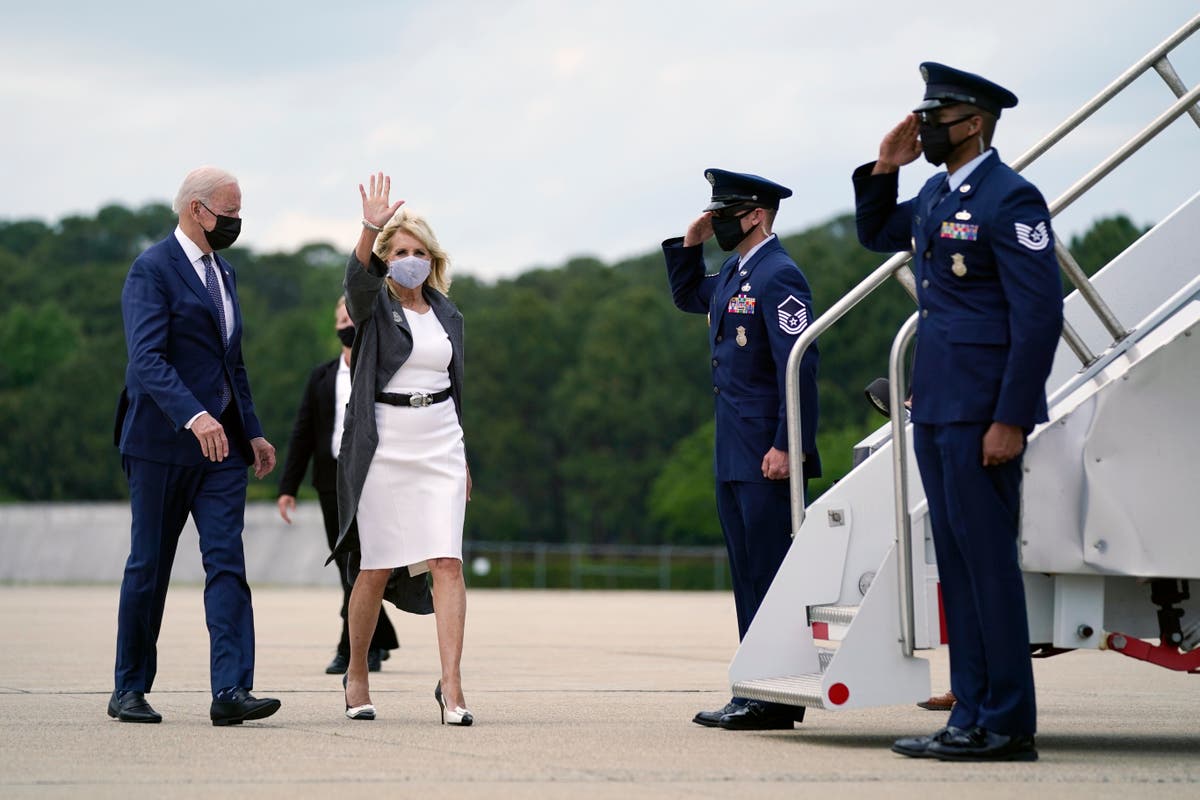 Joe Biden has quadrupled the US’ refugee cap after facing a bipartisan backlash for being slow to increase the low number set by the Trump administration.

The president formally confirmed the decision to raise the bar from 15,000 to 62,500 refugee admissions per year, three months after he submitted a proposal to Congress on the issue.

“It is important to take this action today to remove any lingering doubt in the minds of refugees around the world who have suffered so much, and who are anxiously waiting for their new lives to begin,” Mr Biden said.

He added that the limit introduced by his predecessor “did not reflect America’s values as a nation that welcomes and supports refugees”.

Meanwhile, Republican Wyoming representative Liz Cheney is in trouble with her party once again after going after Donald Trump at a closed-door event, as well as tweeting her disdain at anyone who still insists the 2020 election was stolen.

Elsewhere, Facebook’s independent oversight board will determine on Wednesday whether it will uphold Donald Trump’s suspension from its platforms.

The ban came after the then-president was seen to condone the rioters who stormed the Capitol building in early January.

The Biden administration has revealed it will now alter how it distributes Covid-19 vaccines by instead prioritising states showing high interest in the jabs over ones with a lower demand.

Each state’s share of the US population has determined how many vaccine doses they are allocated week to week by the federal government.

This process would still remain, the White House said, but unordered doses from states will no longer carry over week to week. Instead, the federal government will distribute those doses to other areas showing higher demand for the vaccines.

The White House has confirmed a big drop in the number of migrant children currently in the custody of Customs and Border Patrol at the southern border.

George Conway warned that an investigation by the FBI into the business dealings of Donald Trump’s former attorney, Rudy Giuliani, indicates that the former New York mayor seems to be in “deep s***”.

Mr Conway, a conservative attorney and husband of Kellyanne Conway — a former counsellor of Mr Trump — was talking to The Daily Beast’s “The New Abnormal” podcast on the topic of the former president’s baseless allegations of election fraud, before discussing the FBI investigation of Mr Giuliani.

It follows twin raids on the former presidential attorney’s apartment and office, with federal investigators seizing computers and cellphones.

The FBI says that a suspect involved in Monday’s shooting incident outside the main gate of CIA Headquarters has died from his injuries.

A review will examine the circumstances of the shooting and collect all relevant evidence from the scene.

CBS White House correspondent Ed O’Keefe reports that the Biden administration is shifting its distribution of Covid-19 vaccine, telling state officials that supply left unordered will become available to other states. He cites multiple officials familiar with the new plans.

A shot of Jill and Joe Biden meeting former president Jimmy Carter and his wife Rosalynn has lit up social media today, partly because of the warmth of the occasion but largely because of the bizarre scaling effect created by the positioning of the four subjects.

Some users speculated that the photographer’s choice of lens may be responsible for the resulting distortion, which makes the current president appear approximately three times the size of Mr Carter’s wife.

Well-known Republican-aligned campaign group Judicial Watch, which has long pursued legal action against Democrats and propagated false claims about everything from climate change to electoral fraud to conspiracy theories involving the Clintons, is now suing the Department of Homeland Security “for records of communication between Secret Service officials assigned to the White House regarding the Biden family dogs”.

The group’s grievance seems to be related to reported incidents in which Biden’s dog Major bit people. “The public has a right to know the details about any incident in which Secret Service personnel were injured by President Biden’s dog,” said Judicial Watch President Tom Fitton.

The lawsuit has been met with derision.

Kevin McCarthy may have made clear this morning that Liz Cheney’s days in the Republican leadership could be numbered, but the congresswoman and her team hardly seem cowed – at least not if her spokesperson’s words are to be believed…

A report from the Daily Beast quotes the president of the Human Rights Campaign describing “conversations” with the White House as it formulates plans to push back against legislation in multiple states that bans transgender women and girls from playing in sports under their own gender identity.

Joe Biden alluded to the legislative battles underway across the US in his recent address to Congress, saying: “To all transgender Americans watching at home, especially young people who are so brave, I want you to know your President has your back.” However, many viewers questioned what the sentence really meant without the president stepping into the breach on specific issues.

Osinbajo Speaks On 2023 Presidential Support Group Formed In His Name