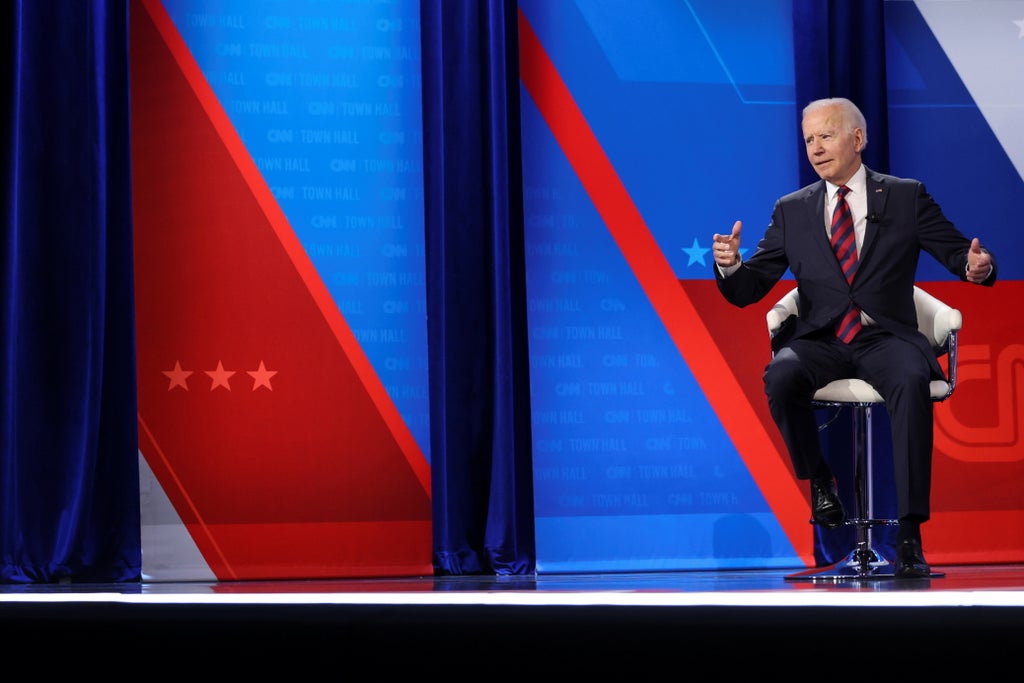 US President Joe Biden has rejected ideas among Democrats to abolish filibuster rules in the US Senate, where Republicans have invoked a procedural tool to block critical voting rights legislation against a tide of GOP election laws. The president suggested that doing away with the filibuster would spark “chaos” in Congress.

During a CNN town hall in Ohio on 21 July, the president told an audience member that he stands by his determination that legislative threats to voting rights present “the most dangerous threat to voting and the integrity of free and fair elections in our history”, pointing to bills that strip electoral oversight from nonpartisan election officials and give it to GOP-dominated state legislatures.

“Never before has there been an attempt by state legislatures to take over the ability to determine who won,” he said on Wednesday night. “This is Jim Crow on steroids what we’re talking about.”

CNN host Don Lemon asked Mr Biden whether he believes that protecting the filibuster is “more important than protecting voting rights, especially for people who fought and died” for their right to vote.

“No. It’s not,” Mr Biden said. “But here’s the deal: What I also want to do – I want to make sure we bring along not just all the Democrats. We bring along Republicans, who I know know better. They know better than this. And what I don’t want to do is get wrapped up, right now, in the argument of whether or not this is all about the filibuster.”

Senate Republicans have relied on current rules requiring 60 votes to move legislation forward in the evenly divided upper chamber of Congress before voting on its passage.

Republicans in the current Congress blocked the For The People Act and a bipartisan committee to investigate the Capitol riot.

Democrats have pushed for passage of the For The People Act as well as a restoration of the Voting Rights Act to be named after late civil rights leader and US Congressman John Lewis in an attempt to revive parts of the landmark law that were stripped out by the US Supreme Court in 2013.

But a growing number of Democrats advocating for filibuster reform has been at odds with the White House, which has continued to suggest it could find bipartisan support on voting rights legislation despite overwhelmingly partisan state measures to undermine the right to vote – bills emboldened by Donald Trump’s baseless narrative that the election was “stolen” from him and marked by so-called “irregularities”.

Among the 30 measures obstructed by the filibuster between 1917 and 1994, half involved civil rights, according to an analysis from the Brennan Center for Justice. They blocked anti-lynching bills, measures to prevent poll taxes and discrimination in the workplace and at the ballot box, and the Civil Rights Act of 1957.

Mr Lemon pointed out that the filibuster itself is a relic of Jim Crow.

“There’s no reason to protect it other than you’re going to throw the entire Congress into chaos and nothing will get done,” Mr Biden said. “And there’s a lot at stake. The most important one is the right to vote. That’s the single most important one. And your vote counted, and counted by someone who honestly counts it.”

He admitted that “abuse of the filibuster is pretty overwhelming” and suggested a return to the so-called “talking” filibuster in which lawmakers would “stand on the floor and hold the floor” to stall legislation.

“I would go back to that where you have to maintain the floor. You have to stand there and talk and hold the floor,” he said.

“Look, the American public, you can’t stop them from voting,” Mr Biden said. “But what I want to do is I’m trying to bring the country together. And I don’t want the debate to only be about whether or not we have a filibuster or exceptions to the filibuster or the – going back to the way the filibuster had to be used before.”