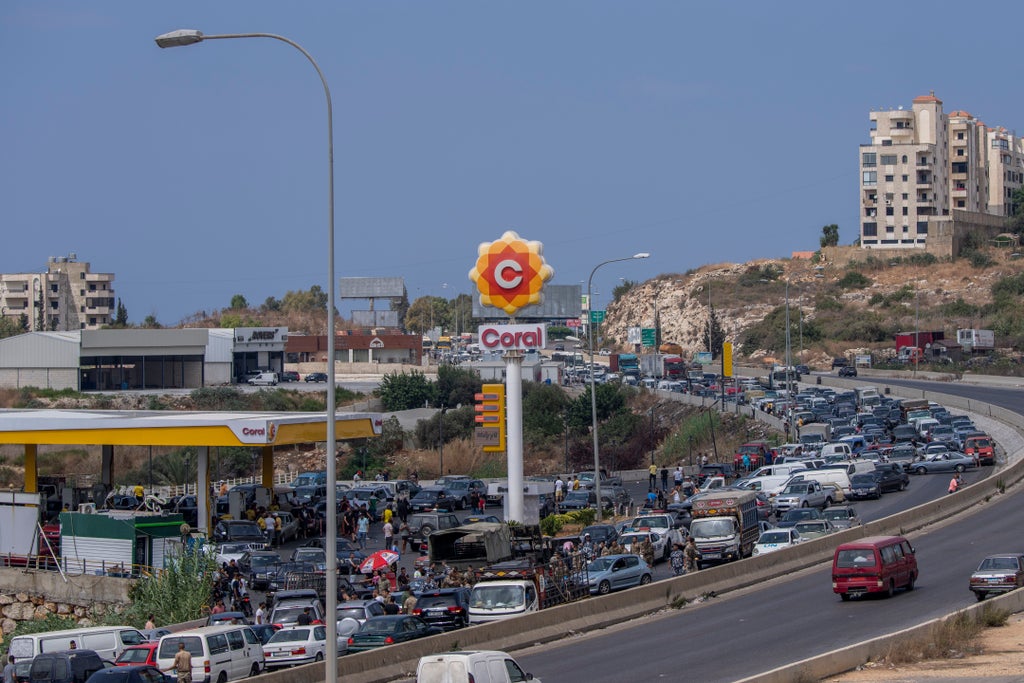 A crippling fuel crisis in Lebanon, causing rolling power cuts and cutting water access to millions, has sparked a diplomatic spat with the US over potential sanction violations and prompted the United Nations to promise $10 million in fuel aid.

The cash-strapped country is in the grips of one of the worst economic collapses in modern history according to the World Bank.

Grounded in decades of chronic mismanagement and corruption, the crisis has seen the local currency lose 90 percent of its value since 2020 while food prices have quintupled in the same time frame.

Dwindling foreign reserves and rampant smuggling has meant that the state has been unable to secure enough fuel to run its power stations leaving most households struggling with just two or three hours of mains power a day.

That has also impacted the country’s waste treatment and water supply: the UN has warned that four million people will imminently lose access to safe water.

A diesel shortage, meanwhile, has meant the generators citizens rely on in place of mains power are also unable to operate for most of the day.

All of this has meant hospitals have to close wards, reduce services, switch off air cooling systems despite the searing summer heat and at some points beg online for supplies warning that they would have to turn off ventilators and dialysis machines.

On Wednesday the United Nations allocated $10 million to fight the fuel crisis,  $6 million of which will be used to support  65 hospitals in Lebanon primary healthcare centres, dispensaries and medical cold chain storage.

The rest will help with a public water supply and wastewater treatment systems, supporting families that have been increasingly relying on private water trucking which is becoming unaffordable and unsafe.

But the escalating fuel crisis has also sparked a diplomatic row. The US has warned Lebanon against accepting a shipment of fuel from Iran which would violate US sanctions imposed on Tehran after former President Donald Trump pulled America out of a nuclear deal between Iran and world powers in 2018.

A delegation of four US senators visiting Lebanon this week warned the import of the Iranian oil could have “severely damaging consequences”.

Monitoring website Tankertrackers.com said on Friday at least two tankers are making their way to Lebanon with one due to reach the Suez Canal in a few days. The website has not released the name of the vessels involved. Hezbollah has not said where they would dock.

The country’s energy minister Raymond Ghajar said that he had received no request for fuel to be imported from Iran – implying Hezbollah had bypassed the state with the move.

The Independent repeatedly reached out to Ghafar for comment but received no reply.

The visiting Democrat senators warned it could severely impact relations with the west and said that, instead of looking to Iran, America would help Lebanon overcome fuel shortages.

The US has said it is in talks with Egypt, Jordan and the World Bank to help find solutions to the energy crisis including potentially transmitting electricity via the Syrian grid. The Lebanese presidency confirmed last month Washington had decided to help through this plan.

A delegation from Lebanon’s caretaker government is set to visit Syria on Saturday in the highest-level visit in years as a first step.

That said, American sanctions on Damascus are still a complicating factor.

The US has also vowed support for Lebanon’s US-backed army whose salaries have lost more than 90 percent of their value because of the collapse of the Lebanese lira.

The senators pushed for the immediate formation of a Lebanese government that can begin urgent reforms, unlocking international aid. Lebanon has been leaderless since the cabinet resigned in the chaotic aftermath of a massive explosion at Beirut port last August.

“It is inexcusable that in the middle of this life-threatening crisis, the political leaders in Lebanon have refused to make the tough choices in order to form a government,” Sen. Chris Murphy of Connecticut told reporters at the end of the two-day visit.

He said Lebanon needs a government that can negotiate with the International Monetary Fund.

Piling further pressure on the country is shortages of petrol, which has had the knock-on effect of strangling transportation of food and goods causing further misery.

Petrol station queues in Lebanon are now so long, one privately owned petrol station chain this week launched an app where drivers can book an appointment to refill their tanks to save time.

It is not uncommon to see kilometre-long queues of cars by the petrol taps, where drivers  park overnight to save a place.

The lines are so long they frequently clog up main roads and motorways with deadly consequences: several people have been killed and injured this year as at night, drivers do not see the stationary cars.

This week Wookood petrol station chain launched a new online booking service that its owner told local media would mean people would only need to queue for 10 minutes.

The Central Bank has blamed petrol shortages on hoarding and smuggling to Syria because petrol is so heavily subsidized at great cost to the state which is running low on foreign reserves. Last month they partially lifted subsidies.

A source within the Central Bank told The Independent on Friday they expected subsidies to be slashed even further by the end of this month, seeing prices skyrocket with knock-on effects.