Kentucky tornado: Two babies found alive after being blown away from home in their bathtub 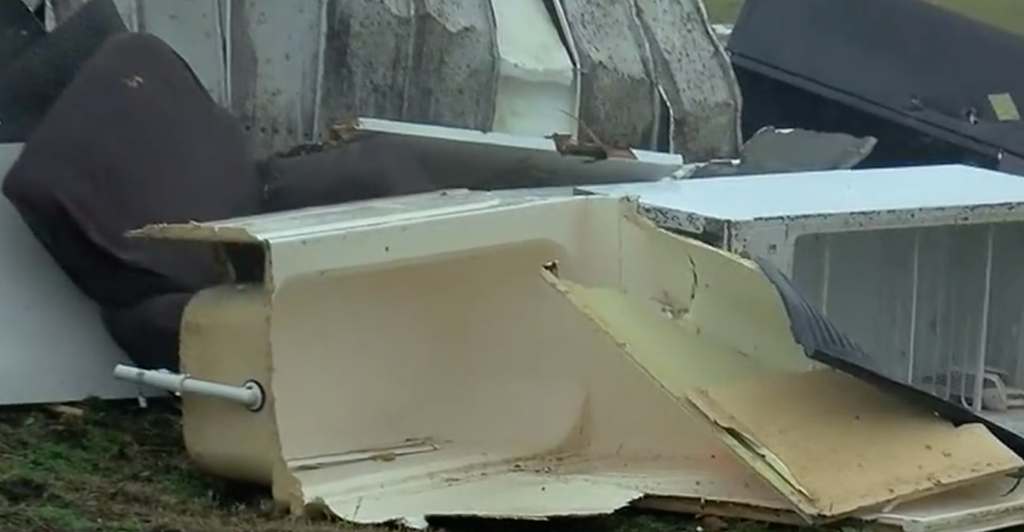 Two Kentucky infants placed in a bathtub with a blanket, pillow and a Bible by their grandmother as a deadly tornado approached survived even after the tub was ripped from the floor and “lifted”.

Clara Lutz’s voice broke as she described the night of 10 December – when historic storms swept through the state and levelled her house in Hopkins County. She told 14 News that she was looking after Kaden, 15 months, and Dallas, 3 months, at the time.

Ms Lutz put the babies in the tub and covered them up as the tornadoes tore a path towards them. Some people recommend getting into a bathtub during tornadoes on the reasoning that pipes and construction will make the tubs sturdier than other parts of homes.

“I felt the rumbling, I felt the shaking of the house. Next thing I knew, the tub had lifted and it was out of my hands. I couldn’t hold on, I just — Oh my God,” Ms Lutz told 14 News.

She said the tub ripped out of the floor as the storms tore her house down to the foundations. Not only could she see nothing in the darkness but she also says the tub’s water tank hit her in the head amidst the chaos – but she frantically kept searching for her grandchildren.

“I was looking everywhere to see where the tub may be. I had no clue at all where these babies was. All I could say was ‘Lord, please bring my babies back to me safely. Please, I beg thee,’” she told the station.

After the tornado passed, rescuers discovered the tub in the yard upside down, News 14 reported – with Kaden and Dallas underneath.

“I got in the sheriff’s car down at the end of my driveway, and it wasn’t long after that that they opened up the door and brought me Kaden, my 15-month-old. And they brought me my three-month-old, baby Dallas. They brought him to me. He had a goose egg on the back of his head, we didn’t know what was wrong,” Ms Lutz told the station.

She said the baby’s brain was bleeding but stopped before the child even arrived at Vanderbilt Hospital in Nashville.

At least 78 people died last weekend in Kentucky as storms swept through in what Governor Andy Beshear called the most destructive tornado event in the state’s history.

He said in a press conference on Saturday that all people reported missing had finally been accounted for as recovery efforts continued.

In Kentucky, Gov. Beshear said help from the Federal Emergency Management Agency had been extended to six additional counties and that relief benefits provided for funeral expenses have been increased to $10,000.

“They shouldn’t have to have a cheap funeral for their loved one,” he said. “That’s not right.”

Beshear said some homes remain without power or under boil water advisories and that 944 Kentuckians have been given shelter in hotels or state parks. He also said applications were being accepted in 14 Kentucky counties for disaster unemployment assistance for those whose jobs were displaced by the storms.

But Ms Lutz’s grandchildren weren’t the only ones saved by a bathtub as the tornados ripped through Kentucky and nearby states; a total of 92 people have been confirmed dead in total so far across the region.

In Arkansas, Jada Madden told CBS 42 a tub had saved her family, as well. She was at home with her fiance and their eight-month old when the sirens went off, she said.

“We grabbed a pillow, and we sat in the bathtub, and as soon as we sat down, it was gone,” she said of their house. “I thought I was going to be buried alive because I felt like I was just being pushed straight down.”

When the chaos calmed, she said, the house was no more – but the tub was in the middle of the street and the trio survived with minor scratches.