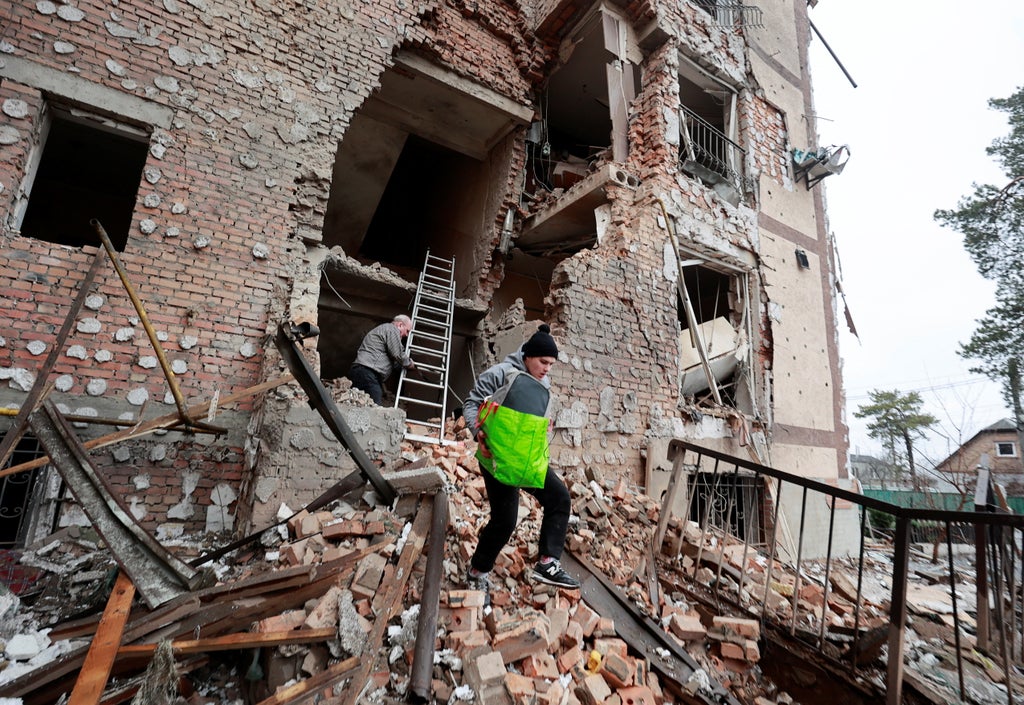 An International Criminal Court prosecutor said he has opened an investigation into possible war crimes and crimes against humanity in Ukraine.

Prosecutor Karim Khan said he told the ICC presidency he had begun investigating after a referral from 39 countries.

In a statement, he said: “I have notified the ICC Presidency a few moments ago of my decision to immediately proceed with active investigations in the situation. Our work in the collection of evidence has now commenced.”

Britain and dozens of allies pressed an investigation to be launched rapidly into Vladimir Putin’s bombardment of Ukrainian cities.

The move allowed Mr Khan to proceed straight to investigation without the need for judicial approval.

The referrals from countries including Germany, France and Poland came as Ukraine’s capital Kyiv braced for a siege, second city Kharkiv reeled from further strikes and the control of port city Kherson was contested.

Strikes that damaged the Babi Yar Holocaust memorial in Kyiv and the central square in Kharkiv have caused revulsion, and Western allies fear it is a sign of a shift in Russian tactics further towards the indiscriminate targeting of urban areas.

For the first time the UK explicitly accused Mr Putin of war crimes, with Downing Street claiming “horrific acts” were occurring on an almost hourly basis as population centres are targeted.

At Prime Minister’s Questions, Mr Johnson said: “Putin has gravely miscalculated; in his abhorrent assault on a sovereign nation, he has underestimated the extraordinary fortitude of the Ukrainian people and the unity and resolve of the free world in standing up to his barbarism.”

He added: “What we have seen already from Vladimir Putin’s regime in the use of the munitions that they have already been dropping on innocent civilians, in my view, already fully qualifies as a war crime.”

More than 2,000 civilians have died since the invasion, Ukraine’s state emergency service said, although that figure has not been independently verified.

The United Nations’ refugee agency believes around 874,000 people have fled Ukraine but that figure is soon expected to reach a million.

“An investigation by the International Criminal Court into Russia’s barbaric acts is urgently needed and it is right that those responsible are held to account.

“The UK will work closely with allies to ensure justice is done.”

Justice secretary Dominic Raab, a former lawyer who has prosecuted war crimes, said it is now critical to “preserve properly all evidence of war crimes”.

“Any Russian leader or officer carrying out orders that amount to war crimes should know they face ending up in the dock of a court and ultimately in prison,” he added.

Earlier at PMQS, Mr Johnson promised to publish a list of people associated with Mr Putin who could be liable for sanctions, as he said “the vice is tightening on the Putin regime” through the restrictions imposed by the West.

But he was urged by Labour leader Sir Keir Starmer to immediately ramp up the measures against allies of the Russian leader.

Sir Keir, who called for Chelsea owner Roman Abramovich to face sanctions, said: “Now is the time to sanction every oligarch and crack open every shell company so we can prove Putin wrong.”

The Russian-Israeli billionaire later announced he will sell the club, with the “net proceeds” going to a charity supporting victims of the war in Ukraine.

UK officials have said more sanctions are coming, against oligarchs, Russian National Security Council members and banks, and that they believe the economic shock of the moves has been more significant than Mr Putin was expecting.

They said they wanted sanctions to go further, including the banning from the Swift payment system to apply to all Russian banks.

In other developments, the Russian defence ministry claimed that Kherson, in the south of Ukraine near the Crimean peninsula annexed by Russia in 2014, was under the “complete control” of Russian soldiers – but the Ukrainian military disputed this.

The lack of progress in meeting the aims of the invasion had led to a change in tactics, focusing on aerial and artillery bombardment of cities rather than the kind of lightning military advances originally envisaged by the Kremlin, Western analysts believe.

A strike hit the regional police and intelligence headquarters in Kharkiv, killing four people and wounding several, with residential buildings also hit according to the Ukrainian authorities.

Mr Wallace said the advance of Russian forces continued to be slowed by a combination of overstretched logistics, poor morale and brave resistance by Ukrainian fighters.