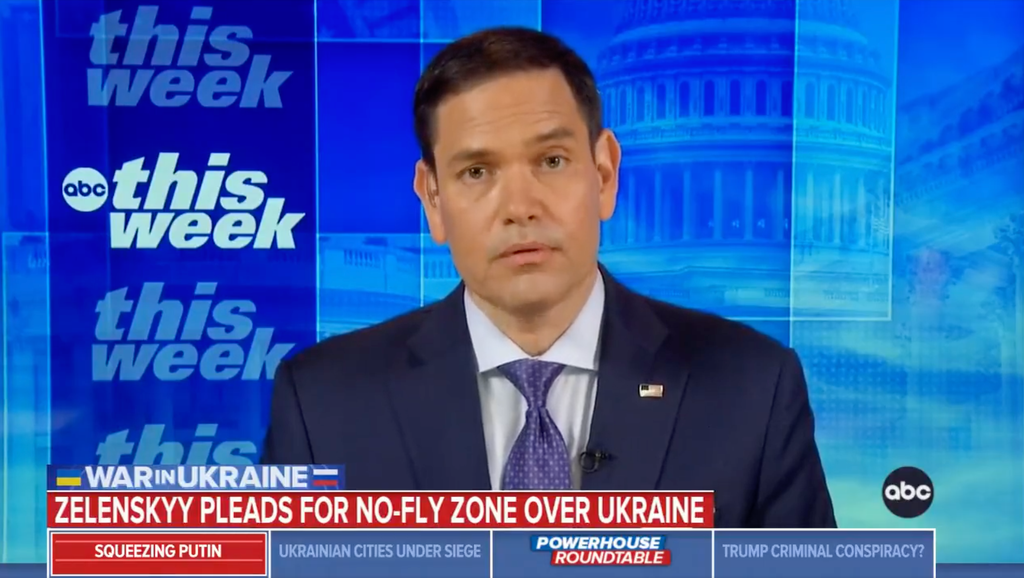 US Senator Marco Rubio has issued a harsh warning to those calling for a no-fly zone over Ukraine – it could trigger a third world war.

“I think people need to understand what a no-fly zone means,” the Florida Republican told ABC’s George Stephanopoulos on Sunday. “It’s not some rule you pass that everybody has to oblige by. It’s the willingness to shoot down the aircrafts of the Russian Federation, which is basically the beginning of World War III.”

As Russia’s invasion continues, Ukraine’s president, Volodymyr Zelensky, has pleaded with the United States to establish a no-fly zone over his country. But US lawmakers of both parties have said that’s too dangerous, because it could lead to a direct conflict between the US and Russia – the world’s two foremost nuclear powers.

“Frankly, you can’t put those planes up there unless you’re willing to knock out the anti-aircraft systems that the Russians have deployed – and not just in Ukraine, but in Russia and also in Belarus,” Mr Rubio explained.

Democrats have also expressed that concern. After a Zoom meeting between Mr Zelensky and members of Congress, Rep Brad Sherman of California suggested a less perilous alternative to the no-fly zone – one that the White House says is already in the works.

“His [Zelensky’s] main ask was for the US to allow Poland and Romania to transfer Soviet era jets to #Ukraine, and for the US to compensate by giving more advanced planes to those two NATO allies,” Mr Sherman, a Democrat, tweeted. “This is much safer than a ‘no fly zone’ as it doesn’t involve Americans killing Russians.”

But not everyone agrees. General Philip Breedlove, a former supreme allied commander of Nato, has said a no-fly zone may end up becoming necessary, despite the risk of a wider war.

“How many Ukrainians have to die?” Mr Breedlove asked in an NPR interview on Thursday. “We’re saying now that the no-fly is not on the table. Who’s to say what happens in the future? If we see the level of human destruction that we saw in Syria when they [the Russians] were barrel bombing cities or in Grozny and Chechnya – if we see that kind of destruction, who’s to say that the no-fly zone doesn’t come on the table?”

The Russian invasion of Ukraine is now in its third week. The United Nations has estimated that at least 227 Ukrainian civilians have been killed, and more than 1.2 million have fled the country. On Sunday, reports emerged that Russian soldiers were firing on evacuees.