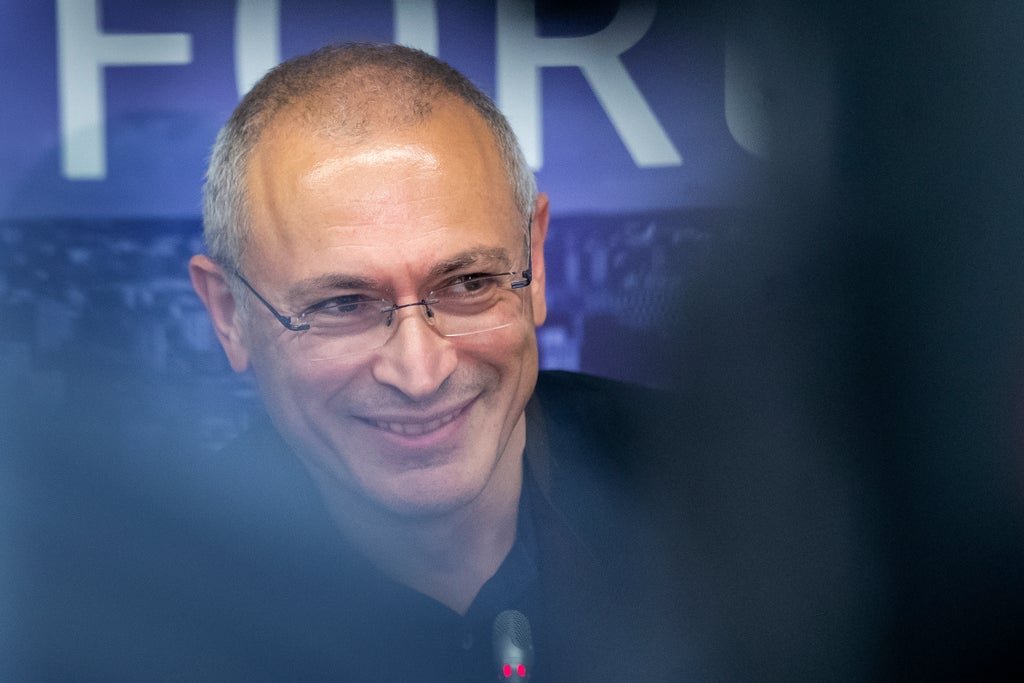 Mikhail Khodorkovsky, the self-exiled Russian oligarch and vocal Kremlin opponent, has called on Russian billionaires and officials who have fled the country to publicly denounce President Vladimir Putin’s war in Ukraine as criminal.

“Public figures cannot leave quietly and then sit quietly,” he said. “If you have left, then you should publicly dissociate yourself or we should be forced to suspect that you are acting on [the Kremlin’s] behalf.

“You should step up to the microphone and say that Putin is a war criminal and that what he is doing is a crime, that the war against Ukraine is a crime. Say this, and then we’ll understand that Putin doesn’t have a hold over you.”

Mr Khodorkovsky – who was Russia’s richest man before he was arrested in 2003 and imprisoned for 10 years while his Yukos oil company was taken over by the Russian state – was referring in particular to the high-profile Russian oligarchs Mikhail Fridman and Pyotr Aven of Alfa Group.

They were once his comrades among Russia’s seven original oligarchs of the 1990s, who then controlled much of the country’s economy.

Mr Fridman and Mr Aven left Russia in the immediate aftermath of Russia’s invasion of Ukraine only to be put under sanctions by Britain and the European Union over alleged close ties to the Putin regime.

Mr Khodorkovsky was also referring to Anatoly Chubais, the Kremlin special envoy whose departure from Russia late last month made him the highest-ranking official to step down from his post and leave the country since the invasion.

Mr Chubais had overseen the 1990s-era privatisations of state-owned enterprises, which were the source of Mr Khodorkovsky’s, Mr Fridman’s and Mr Aven’s wealth.

They are among many in the Russian urban elite who have left the country in the aftermath of the invasion.

While Mr Chubais has not made any public comment since his departure, Mr Fridman and Mr Aven have both given interviews in which they have complained about the impact the sanctions have had on their daily lives. They have said that the sanctions reflect a Western misunderstanding that Russians like themselves could have any influence over Mr Putin’s policies.

Both have refrained from directly criticising Putin over his invasion of Ukraine, though Mr Fridman, who grew up in the western Ukrainian city of Lviv, told journalists after the imposition of EU sanctions that the war was “a huge tragedy” that “should be stopped as soon as possible.”

Mr Fridman said he did not want to speak against Mr Putin directly because it would not have any impact on political decision-making in Russia, while at the same time it would endanger the hundreds of thousands of his employees who remain in the country.

Mr Khodorkovsky said he agreed that it was naive to think that either Mr Fridman or Mr Aven could influence the president to end the war.

Mr Putin has completely overturned the workings of power in Russia since the 1990s, when Russia’s richest oligarchs were able to influence President Boris Yeltsin’s government.

But Mr Khodorkovsky said that if any of these billionaires want the sanctions against them to be lifted, they need to demonstrate their independence from Mr Putin.

He urged them to say they regret ever having anything to do with the president and will never do so again. The suggestion that Mr Putin could arrest the employees they’d left behind in Russia if they spoke out against the president, Mr Khodorkovsky said, was no more than “cover.”

“This is ridiculous to even hear. It means Putin has some kind of hold over you,” he said. “And if there is a hold on you, then it means your resources are dangerous during the war.” Suspicions would remain that they could be carrying out Kremlin orders, such as “paying for supplies,” including goods officially under embargo.

He said the tycoons could direct their associates to make these payments, and he warned that these individuals could also seek to influence European policymakers on Mr Putin’s behalf.

Mr Khodorkovsky’s comments could strike a nerve with Russian billionaires under sanctions who have been trying to deny connections with Putin.

Mr Khodorkovsky has long been seen by the wealthiest Russians as an outsider who paid a high price for his political ambitions at a time when Putin, early in his presidency, was seeking to eradicate any challenge.

While Mr Khodorkovsky languished in a Siberian prison camp, others – including Mr Fridman, Mr Aven and Mr Chubais – adapted to and then benefited from the Putin regime. Mr Fridman and Mr Aven made a point of steering clear of politics at a time when Russia’s billionaires became increasingly beholden to the Kremlin.

Mr Khodorkovsky said these men and others should shake off their fear and speak out, even if it means putting their own lives in danger. “This is a real war. People are dying every day,” he said. “The regime for which you worked is killing people. Your personal fate compared to this does not mean so much. Take the risk.”

He said that Russia’s oligarchs bear a responsibility for not doing more “to stop the war criminal” and now must pay by taking that risk.

Mr Khodorkovsky blamed Putin’s decision to invade Ukraine on the president’s increasing isolation and said a small number of people who did have access to him had been able “to distort his view of reality.” As a result, Mr Khodorkovsky predicted that Putin would eventually face a widespread backlash and that it could ultimately be his turn to pay.

“It was a mistake for him, because I don’t know how long he could have remained in power had he behaved more calmly, but now it will be much more difficult for him,” he said.